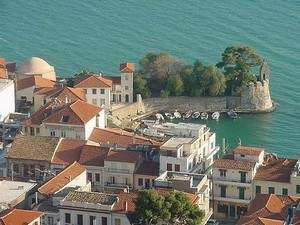 (1) Your profs have applied for and been granted official tour guide status in Greece. This means we can lecture in museums or on sites. But, understand that, from the Greeks' point of view, we're essentially taking a money-earning opportunity away from the Greek citizens who are guides. Predictably, they're not too happy about it. Sometimes we may be accosted by a guide who has to see our papers to be appeased (Dr. King is in charge of this, since he's such a smooth-talker). Usually there's not a problem, but sometimes, just to keep the peace, we may be extraordinarily quiet in a museum. Understand that if we move away from you, it's not because we don't like you or don't have something to say :--)

(2) You, of course, are not permitted to lecture on site or in a museum.

(3) Museum and archaeological site attendants in Greece are very vigilant. They're equipped with whistles. If you hear a whistle, freeze and check what you're doing. Many things are not permitted in Greece which would be OK in the U. S. For example:
(a) The Greeks do not tolerate ANY physical horsing around in a museum. They regard sitting or lying on the floor as undignified and undignified is a no-no.
(b) The Greeks expect their 'stuff' to be treated with respect. Do not pose in front of a statue for some goofy picture. In fact, the Greeks prefer that you not put yourself or your friends in any photo of a Greek work of art.
(c) There is actually a dress code for many Greek museums, churches, monasteries, etc. Essentially the dress code requires that the balls of the shoulders and the knees should be covered, in both genders, i.e., no 'muscle T's' or short shorts. While the Greeks are relaxing these rules a bit, remember as Americans we would rather be regarded as respecting the culture's rules too much than too little.

Just keep these rules in mind and have a grand time in the midst of some of the greatest artistic and architectural achievements of the West!